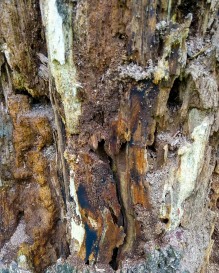 Yesterday i mowed my lawn. Not terribly exciting, even if i did do it with my new battery-operated mower, which is crazy quiet and so much easier than my old gas mower. Not even notable for how good the lawn looks this morning after a night of rain and a morning sky that odd shade of lavender-grey that makes all the colors really “pop”. But it did make an impression nonetheless.

When i was finished washing off the grime and pollen and dust and clippings, i discovered that one of my fingers had developed an appendage of its own.

I spent the night thinking i had somehow whacked my finger without feeling it. The large hard lump on the side of my pinkie was surely just a little bone chip. It’s only mildly discolored, doesn’t really hurt, and i can still move the finger. Obviously not anything permanently debilitating.

I wish there was a word for that fear-disbelief-anger-embarrassment you feel when you’ve hurt yourself without realizing it. The older i get, the more lumps, bumps, and bruises appear without apparent reason. I can’t decide if our bodies grow numb, or we just get so distracted that we cease to notice things like the pain of knocking an end-table so badly that you leave a hematoma the size of Trump’s toupee on your thigh.

In any case, i woke frustratingly early for a Sunday morning today. As i lay there in bed, listening to the rain, and trying to devise a plan for my backyard, a different theory of the lump starting to evolve.

When i bought this house, there was a fire pit in back that had a single bench made of cement blocks piled together. The other three seats were made from tree stumps. As i was mowing by them yesterday, i noticed that they had become severely rotted.  I pulled one apart and knocked it over, just out of morbid curiosity. I’m not a big bug fan, but the idea that a single old tree stump could house any number of things was more powerful than my fear and disgust with palmettos. My curiosity was rewarded. The stumps had become a kind of condo for ants, worms, and some remarkably beautiful speckled slugs, among other creepycrawlies. After the mowing, i went back and poked some more.

You know those Italian villages that appear to be carved into the sides of rock faces? That’s what this reminded me of. As i peeled back the bark, a textured brown, tan, and grey cliff with holes/doors of various sizes carved into it began to emerge. The slime from the slugs left an iridescent path reminiscent of water and ice coming out of split shale. The sight both filled me with wonder and made me gag. God/Goddess/Universe is a freaking genius…. But She is also kind of gross.

So as i lay there listening to the rain, i started to plan my attack against the insects’ urban sprawl. I’ve been in this house for almost three years, but have never gotten around to lighting the fire pit. (I’ve been busy. And lazy. Don’t judge me.) The yard work that has been done has created quite a pile of sticks in the concavity, and i’ve a large back stock of logs besides.  I need to burn the sticks first and then somehow manage to get those big stumps onto the fire. They are twice the size of my own trunk, but i could probably pick them up if it weren’t for the bugs…

And that’s when it hit me. That lump on my finger is probably a bite. How the hell i managed to get bitten without feeling it seems strange, even for me. And it’s not like it’s itchy or anything. I slept all night without an allergic reaction. And it is no worse this morning.

Oh hell… What if something laid eggs in my finger? Daenerys is sexy as the Mother of Dragons, but i will be much less so as the mother of rhino beetles. Or fire ants. Or whatever hatches out of my hand.

Naaahhhh, i mean, what is the likelihood, right? Those stories of people hatching insects under their skin are myths, or bare minimum, rarer than nerdy Klingons.

(Can you picture a Klingon accountant? Carrying a badass pen in a snake skin pocket protector instead of a weapon in a sheath? Me neither. But there must be some, right? Someone’s gotta keep the books.)

Anyway, back to the bite theory. I went back to the stumps earlier today to take some pictures. And now i have that phantom infestation like you get when someone says the words “head lice”. I can feel ants crawling up my pants leg, even tho i am certain it’s my imagination. I feel the tickles of beetles and the damp of slugs on my toes, tho i can see there are none.

Apparently, phantom insect bites get my attention more than the real thing.

Of course, that’s assuming it is a bite. It could still be a bone chip.  It could be a torn pinkie ligament. Hell, it could be an alien, poised to pop out and deliver “Ragtime Gal” in a very high and tiny voice. That would only be slightly more surprising than the fact that i didn’t feel it when it happened.

If i didn’t notice what caused this, what else has passed by me without catching my attention? It’s not exactly on the same level as missing Liam Neeson smacking my bottom and calling me sweetheart; but it is still a bit disconcerting. Like, maybe, walking right past a $20 bill on the sidewalk. Or going the whole day with your shirt inside out. I’m too young to be that absentminded already.

Not really, but that’s what i tell myself.

In any case, i’m sure it’s nothing exciting. I’m more just miffed with myself for not knowing how it happened. Especially since there was no alcohol involved. Just my own aging brain. Tequila would have made for a better story. And if whatever is in my finger ends up on a nasty youtube video, that’s exactly how i will explain it. Unless it’s a little singing frog in a top hat. Then i’m gonna make millions.